Like every visitor, it is difficult to be in a new place without falling into the temptation of comparison – to compare one’s place of residence with the place of visit. So easily, before leaving Douala, and now that we are in Yaoundé, I began to notice subtle differences – okadas with umbrella-covers, cabs used for public transport, men kissing women on both sides of their cheeks. Jide mentions some of these differences too, when we’re in a cab in Yaoundé, noting that although the street reminds him of Allen Avenue, in Ikeja, Lagos, the difference here is the wideness of the street. I am certain that confronting this difference is akin to confronting the difference in language – being unable to speak a language is like being lost to a culture that is staring at your face.

While in the van, leaving Douala, we were reinitiated into the drills of journeying. We had stayed a week without crossing to a new place, and this took its toll on our psyche; we began to complain again about Ray’s driving, Landry adding to the collective fear by intoning that the highway that linked Douala with Yaoundé was the most dangerous of all Cameroonian roads. Emeka mentioned that when driving a group, the group subconsciously drove along with the driver. And so when the driver accelerates, the group does so, all the while reaching for the car’s brakes in their minds. This was a punchy way to summarize the general unease. Emeka took over the driving; calm descended. 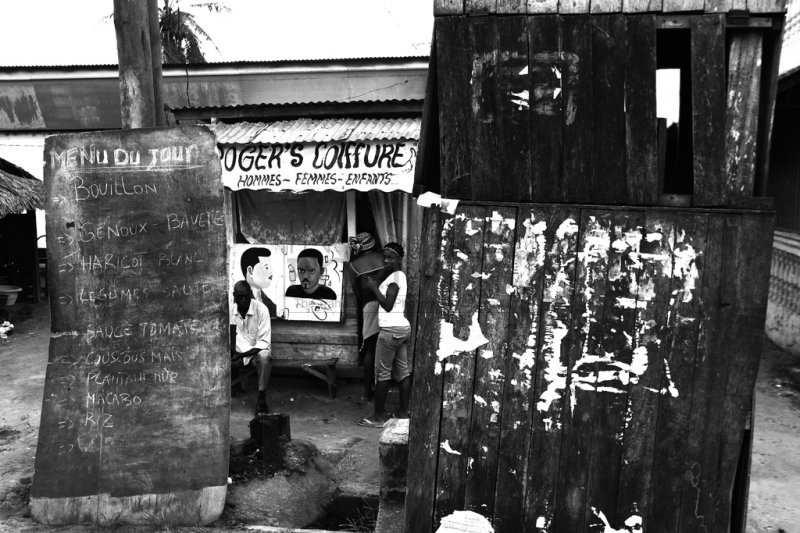 Douala receded, and Yaoundé opened itself. As I expect of myself, I slept off during the ride, waking up when the van had stopped, its door open, and I felt the chillness of the night. A hilly city, Yaoundé’s temperature is expectedly lower than Douala’s, just as one could notice the difference between Lagos and Abuja. Behind the van was a two-storey building, and we slowly climbed. I carried only one of my bags, too weary to carry the other one. I slept with the knowledge that I was in a new city, but without the readiness to interrogate it. I guess this was a shared knowingness; there is, of course, a disadvantage in travelling through several African cities within a short period. Lesedi mentioned, the next day, while we climbed a hilly road that led to the other part of the city to catch a cab, that it was funny that most African cities had the same smell – from refuse dumps, gutters. I agreed. That same evening, standing in front of the Institut Francais building, a long public bus passed. It seemed skewed, slanting to a side, as though it would fall rightwards any minute. Emeka joked that it was the same kind of bus found in Paris, only that this time the bus was in Cameroon. I told Lesedi, recalling our conversation about the smell of African towns and suburbs, that there are such facts as the slanting bus that can’t be debated. It didn’t matter if we argued that it portrayed a town like Yaoundé in bad light – or whatever argument that can be raised in defence. The earlier our mess begins to smell badly to us, the better.

We attended the opening of an exhibition – I will tell no lies, I didn’t identify the name of the artist whose sculptural pieces were exhibited. The most intriguing moment of the evening, for me, was when several poets recited their poems simultaneously, standing in different parts of the exhibition hall. The poems, although in French, charmed me in their disunited symphony; I promised myself to steal the idea for a future show. Such, then, was the first evening; we’d been indoors almost all day, and going out was a pleasant introduction. Only that I thought we should have started with a different experience, a more intimate affair like walking along a busy street. While in the cab that brought us to the Institut Francais, we discussed the vibe and energy around us, the tall buildings towering into the sky as though suggesting more than we could ever know, even if we tried to ask questions around Yaoundé’s architectural history.

By the next morning, Yaoundé had become a workstation. We hurried to the Cyber Café within the premises of Institut Francais. It has been difficult using the internet in Cameroon, even while in Douala. The best we get is EDGE; at such times it is easy to find yourself back home, in that place that is called ‘back there.’ But at the Institut’s Cyber Café, using wifi and then a cable, we easily accessed the internet. Yet, it was impossible to upload images from the road, a responsibility that has haunted me since we arrived Douala. I tried everything – changed browsers, changed computers, used a cable in place of wifi – and nothing changed. It was strange – emails being sent in five seconds, pages opening seconds after they were clicked. I gave up, more than four hours later, unable to do any creative work afterwards, my belly tightening from frustration and hunger.

The evening before, at the exhibition, I met a young man, the graphic designer who usually designed all Institut Francais posters and handbills. I engaged him in a conversation made possible by his passable understanding of English. (That evening, I endlessly expressed how a culture was being lost to me – being unable to read the exhibition texts, being unable to talk to anyone, the beautiful ladies sauntering by). We discussed local publishing around a comic magazine he produced, distribution of books. His comic magazine (details to be found on Bitchakala.com) is published without profit with a group of friends. Afterwards I was interviewed by a correspondent from Mboa.info, around our project, what we were doing in Yaoundé. I think of my enthusiastic responses within a larger frame of responding – being a visitor in a place automatically presupposes the need to be understood. One almost feels as though geniality is being demanded; if we are to intersect our lives from elsewhere with the lives we encounter, being genial is a luxury we must always afford.

There is always a moment when it is unavoidable to think of the ‘there’ that is home. Such as the time when Mario and I bought a plate of salad served with bread. Bread and salad was hardly a meal either of us ate at home, and it was even a stranger combination for lunch, salad mainly served as a starter. Or the time when Emeka and I took a walk in search of food and returned after only finding bits of coconut sold by a roadside hawker.

Yet, somewhere, I hear NAS singing Bridging the Gap, and I feel the feeling that comes with being in the right moment, in the right place, at the right time.