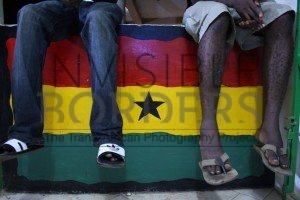 In November 2009, a group of ten Nigerian photographers, film-makers and writers travelled from Lagos to Bamako in a rented bus. They were planning to present a documentation of this journey at the 8 Bamako Biennial for African photography. Their trip was in part motivated by a desire to experience the “invisible borders”: borders with no geographic basis, unnatural borders that were arbitrarily created at some drawing board, borders that cannot be seen from a plane. The reality of border crossings – humiliations, bureaucracy, corruption and crime – can only be experienced if one attempts to cross the continent by land. Mere months after this first project, the Invisible Borders-team undertook a second journey, this time from Lagos to Dakar. Their destination was the Dak’ Art 2010, the Dakar biennial for contemporary art. The exhibition at Kunsthalle Bern features photographic, filmic and textual works from this year’s project.

This exhibition is the direct result of the participation in a workshop and research trip earlier this yearby Philippe Pirotte (Director of Kunsthalle Bern) to Lagos, Nigeria, organised by CCA Lagos and funded by Pro Helvetia.