Our Second Day in Accra by Unoma Giese 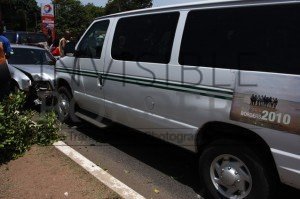 The IB team vehicle aka Snow White on the accident scene, we were just fortunate, it was a close call.

It has taken us longer than planned to organise the queue for the shower and a breakfast that entailed going shopping for ingredients and we are running late for our appointment with the Foundation for Contemporary Art. Nike and Amaize decide to stay and catch up on backlog and we leave to take on the Accra traffic. Standing stationary in the traffic we are just expressing our thanks to God for a really good journey so far, when out of the blue a Mercedes comes hurtling toward us from the other side of the dual carriageway, it’s momentum broken only by a sapling on the centre barrier and hits us head-on. The traffic halts and a crowd gathers in the glare of the sun as people try to make head or tail of the incident. The police arrive and it soon becomes clear that we will not be moving from the spot for a good while. Emeka, Dan and Chriss stay with the car and the rest of us head off to the FCA to catch out appointment. Nothing seems straightforward this morning. We very soon arrive at our destination only to find we have not taken enough Cedi’s to pay the fare. One of the taxi drivers is becoming aggressive when Adjua appears from a building and comes to our rescue. She goes back for money and just then Nii Obodai, the Ghanaian photographer and a friend of Emeka’s pulls up in his beautiful old white LandROver Defender, full of cheer. 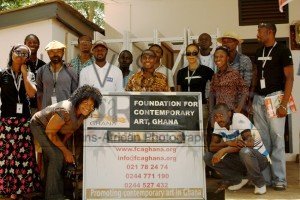 IB team meeting with artists from the Foundation of Contemporary Arts, Accra. Ghana

The FCA is a large compound containing several buildings and common areas, shaded by trees. We are ushered in to the centre of it, where adjacent to the Marcus Garvey Building, two concentric circles of chairs are arranged in the middle of the beautiful grounds of the De Bois Centre. We are surrounded by old sometimes quite gnarled trees and the canopy of their branches serves as a shade from the sun. Planes roar past overhead periodically, appearing in the hole in the ceiling made by the branches. There are artists, poets, photographers in the group and we speak about the need for art to move into public spaces on the African continent, about the exclusivity of the intellectuals who control creative industries and drives, thereby marginalising talents who may not have formal training or academic qualification. The discussion investigates the relationship between the traditional and the contemporary and also explores the issue of identity as regards the labelling of our art or artists as African. We all contributed strong opinions and in all the discourse maintained a healthy balance.

Afterwards, there was a brief photo session before we all dispersed. Nii gave us a ride to the Ivorian Embassy, which was our next stop. All we needed was a letter endorsed by the official stamp to ease our passage through the country where, due to the unrest with rebels in the north of the country, there are huge delays at numerous police check-points.The embassy did not feel generously disposed toward us and it didn’t happen. 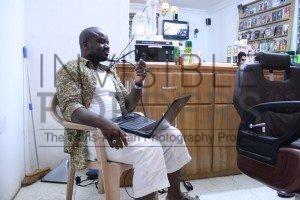 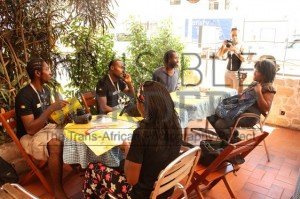 Next we are carted off, still by Nii, to the Sunshine Salad Bar opposite the American Embassy. Nii is a handsome dread with an aura of kindness about him. He has postponed his next meeting to accommodate having lunch with us and is recording much of the time he spends with us on his Leica V-Lux 20 – in video! I can’t help but tease him about his English public school accent, but apart from him being an eloquent and perfect gentleman, there is nothing public school about the man. No snobbery in sight. He is building a house in the countryside and lives on raw foods and upon looking through the menu, I could not thank him enough for bringing us to this little gem of an al fresco restaurant. Honestly, at the risk of sounding like a patronising expat, I have to admit that I was shocked to find the dish I had at any restaurant in West Africa. It was the Crunchy Noodle Salad. Lots of leaves and vegetables, a light layer of noodles, buried in a pyramid of sprouts and nuts and dressed delicately with something quite exquisite.

Emeka, Chriss and driver rejoin the group and we leave for the motor park by Kwame Nkrumah Circle, where we are going to get the insider view on the possible route through the Ivory Coast from the commercial drivers that ply the route, as well as get some photography too. We are stuck in predominantly stationary traffic and decide spontaneously to walk. Accra must have wondered what had hit it. 10 people in uniform carrying cameras and just weaving in between the traffic taking photos of each other and everything. The session at the motor park and market lasted until the last light faded. There was one chap who aggressively demanded to know if we had permission to photograph, but all in all we were amiably accepted as a bit of an interesting spectacle. 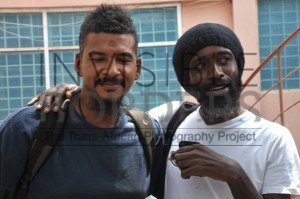 We finally end up back at Panji’s and just collapse all over the floor in tired heaps of human-ness. John Leonard once said “It takes a long time to grow an old friend.” and I am reminded how lucky I am to have good, old friends like Panji all over the globe, whom I only have to ask, for them to welcome into their beautiful homes myself plus ten complete strangers, no questions asked. It’s been another good day, full of experiences, good will and never a dull moment. As my friend Ken Saro-Wiwa Jr so often says: “To be continued…” 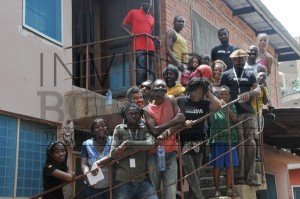 Group photo with friends we met at Panji's