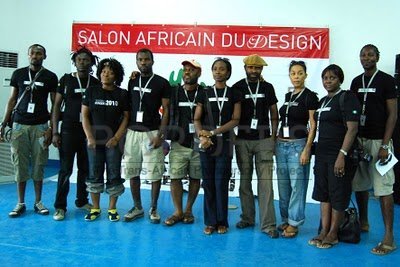 10 of us… you know our names already. We arrive in trickles, Chriss and Unoma first, and others gradually after. We rustle the stately quietude of Thorborn Street, site of Frame Shop Extra , our agreed meeting point. We laugh, we hug, we greet, we change into our swanking new tees, we paste our posters, ‘ginger the ginger plays in the bus, we stow our luggage and photo gears. Curious passerbys, regular Lagosians, draw near, in unuttered wonder- even Mrs Opral Benson, the famed Iya Oge of Lagos herself, draws near the gate near where we are packed, giving us a matured lookover from a safe distance as she makes phone calls from her office premises, Questions? Questions?? From the passersby heading to work this usual Lagos morning. Who are we, what is happening, where are we headed? Questions? Questions??We explain our mission, hand them a postcard or poster, ask them to follow us on www.invisible-borders.blogspot.com- as you are doing now. We set off, pick up Uche from the Egbeda end for Uche.

Fusion of Life/Clusters interest, Chriss’s focus is migration, Lucy said her angle remained invisible to her for the moment, Unoma will focus on “Women, Water, Waste and Food. Chidinma will focus on People and the Environment, Dan was said his ideas were still stewing, Emeka’s intent is “In between the Signs” and Nike’s ideas are wrapped in the muse of silence…

We go past the Agbara junction, sight incoming cars carrying on forced conversations with the ‘grey uniformed men’. We are glad not to be in their path just yet. We anticipate the journey in our patriotic Ford Van: all white, with black tinted windows lined with strips of Nigerian green. We christen it SnowWhite. No Black Maria’s this time. Amen!

The road to Seme is no longer crater-ridden; the make-up kit of the Lagos State government has reached here. Glistening black asphalt has filled the yawning pockmarks on the face of the road…even the road to the Cemetary in the outskirts of Badagry is ‘finding rest’! 

The coast is near. I glimpse a small body of water surrounded by conspiring palm trees. The waters are sedate, but it allows a mild ruffle by the wind. We go past Hamonica Galleria, past a place declaring itself as ‘Port Vegas’. The trees become less conspiratorial, permitting the open embrace of the sea. Grey uniformed officials distort the rhythm of view; Hmmnn! I site the sea, its furthermost reaches a distant mist. A hut there, a shack here, and some palm trees draw near the road in a showy display of vanity. They needn’t have bothered; their leaves are sunburnt to a yellowed green.

We are at the Seme border now with the throng of people, going, coming, selling, and the border officials watching, questioning, checking. The sun is blazing hot outside. Emeka, Dan, Uche and Chriss are our Border Liaison Officers. They disappear with passports and documents into the long mauve-brown building to our right. The group’s resolve is to pay only official fees- not a penny more. We wait. Unoma is sitting quietly, Chidinma is drinking in the scene, Lucy is driving a hard bargain with the biscuit seller, Charles is watching. Amaize is in going in and out of a snooze, Nike is scribbling stuff in a jotter and the Nigerian Customs is welcoming travelers, informing them about port administration and processes, urging them not to patronize touts, in English, Ibo, Yoruba Egun and Pidgin English, in a played back message! We notice the innovation and commend the effort.

The guys arrive in about an hour (a fraction of the time we spent in here 2009) asking for posters and postcards to give to the border personnel. Chriss then regales us with their experience at the fees office. They had made it clear that we must receive receipts for every transaction at al borders for accountability to our sponsors and even the ECOWAS Secretariat in Abuja. This information had forced the hand of would be extortionists, willy-nilly. We are in stitches: ‘no more falling mugu at the border!’ declares Charles, aka Charlie Opo. Things then move on to the ridiculous: Chriss receives a surprising text message from Zain on his MTN line alerting him that his message box is full, and requesting him to edit off old text messages! More laughter erupts and as it subsides, we settle into private silences contemplating what awaits us in Cotonou…

After a courtesy visit to the French Cultural Centre, where we meet with Geraldine Denza a staff of the Centre and a friend of the group, we set off to the Chinese Commercial Centre site of the Salon Du Design Art Exposition. One of us remarks on the aggressive incursion of the Chinese into the African countries. Conversation then streams around this. Simon Njami is right at the door as we enter! We receive a warm welcome. We had been together at the Bamako Biennale in November during the IB2009 trip. We explore the space. Jose Marie Crespin has lovely beadwork on display beautifully strung together from fishbone, stones, sea-shells, brass, native chalk, coral, and gold, silver. Aisa Dioune has ethnic chic bags, furniture, drapes throw pillows made from the loveliest woven fabrics. She makes brisk business as the women throng her space for a piece of beauty. Dominique Kouassi’s designs paintings and metal works display. Cameroonian Njoya Njimah Ahmodou has an awesome collection of traditional and classical-contemporary art from Congo, Zaire, Gabon, Cote d’Ivoire, Nigeria, Mali, and Cameroon on display in four stands. Asked about the acquisition process, he called it, ‘terribly difficult work’ but artistically rewarding. Serge A.T. Mikpon aka “Aston” has fabricated an intriguing 24piece set of objet d’art evolved from throw-away item, bound together by wires and metal: a pole vaulter, drummer, guitarist, violinist, two emergency rescue workers carrying a patient, a turtle, a mask and other ‘creatures’ made from disused spoons, helmet, drinking straws, slippers, plastic receptacles, toothbrushes, flask and every imaginable ‘rubbish’ one can imagine. We make pictures, do our first line on this trip, and befriend fellow photographers, artists and culture workers and then, Kajero, our guide, leads us to a refreshing meal laced a short distance from the road.

After a breakfast at a road side “quick service restaurant” Rafiy Okefolahan, a photographer at the French Cultural Centre Cotonou whom we had met at the Bamako Biennale, the pleasant Fabiola Dadoi – an authentic African Romanian or Romanian African, if you like- with Kajero, lead us to Rue face Cine Vog where Espace Tchif stands solidly in artistic glory. Art and modern Africanity ooze from Espace Tchif, an artistic space that is boldy crossing invisible borders drawn by colonialism and asserting its independence from the herd mentality. It is where Kajero works. Espace Tchif is a privately run cultural centre featuring an exhibition space, theatre, bar and administrative offices, akin to Terra Kulture in Lagos. Its gatekeepers are heroic world icons like Leoplold Sedar Senghor, Che Guvera, Amilcar Cabral, Ogyesefo Kwame Nkrumah, Nnamdi Azikiwe, and others whose blue-toned pictures adorn the gates. When they let you in, you encounter Fela in his youthful aura, then a little later Kongi himself, Nobel Laurete Wole Soyinka, stares at you with feline fierceness from across the wall of the open air theatre. You are in great company that gets even better when you met the Chief who is Tchif, an unapologetic and positive representation of ‘I’m black and proud’. What was the inspiration for this lovely place? A need to put Africa in African Art, rather than the dictates of non-African art patrons and culture workers, he says. Espace Tchif is his way of finding his own artistic independence and being a contributor in the emergence and evolution of artistic independence of other emergent African artists. Today, the musician Dibi Dobo is holding a press briefing at Espace Tchif to announce his new work to the world.

Karejo leads us, (we are joined by Morris, and friends), to a poor settlement by the beach right behind the white and whitewashed building of Cotonou Chamber of Commerce and Industry. Industry is truly happening in the slum settlement- a collage of wooden shacks with rusty roof work. The women of this place are smoking mackerel in dozens which will then be hawked around the town. Lucy and Nike buy 8 pieces for two thousand CFA and hope it makes some difference in this woman’s economy. We meander through the settlement meeting all manner of people: some are friendly, some hostile, some simply want ‘largent l’argent (money) even for a picture of their puppies! Behind this settlement which I jocularly named the Kaka Beach Resort is the vibrant beach, its turquoise waters playing ‘catch-me’ with ‘beachcombers’. Many beachcombers are actually; pardon me, s-it bombers. Kaka is the local word for excrement. There is no sewage system in this poor settlement so the inhabitants, both young and old defecate right on the beachside. The beachside is also their refuse dump- a two-pronged insult to the otherwise beautiful waters. The irony is that the white buildings of the Commerce building, all spick and span, form the foreground, or background depending on where you stand, this environmental disaster. On our part, we simply make pictures, trying to draw out the beauty in the beast. They tell the story much more than a thousand words…

From Kaka Beach, we go to the market and then head for rarefied ambience of the Foundation Zinsou where the exhibition Le Recreation is holding. Here we meet Aston again; his work Le Diplomate (2009) is on display. The diplomat’s body is made from discarded water-hose, a broken chair leg serves as his tie, a broken plastic receptacle his hat, and other odds and ends complete the get up. Bruce Clarke’s ‘Mante (2004) and Memoire Vivre (2005) are also on display. Dominique Zinkpe’s (2009)installation showing handprints and foot prints which then blend into his mounted painting on the wall is quite interesting to see; as is the late George Lilanga’s Sans Titre.( 2002) whose works are of the Jean Piggozi Collection. Lilanga has crossed the invisible border of mortality but his works remains immortal. Here again, we encounter Tchif’s Qui Vevra Verra (2009), a bold installation featuring a transparent mannequin whose torso is filled with literal junk. Mill wraps, coffecans, cigarette packs, haircomb and broken phones. His arms are metal, trousers cement/metal, he wears an oxygen mask and is revving away on a silver bike. An opaque shopping bag hangs from his handle bars but is made to seem transparent. Inside the bag are groceries amidst which is hidden a gun! Upstairs, Tchif’s painting Le parcour des margouillat (The Lizard’s Path) are on display along with other wonderful works by other artists.

Well fed on fine art, we take our leave and go across borders to Togo where the boys at the border give us the usual welcome and we play our ECOWAS is-awaiting-our -receipts trump card. As indeed they are. (Ahem!) But not before saying thank you to our friends at the Cotonou French Cultural Centre whose fraternity we are grateful to have enjoyed.

Oiuda, Cocotomey, Grand Popo, Agoue, Agoivoudou, and so on… and then we arrive Lome and head for the plush rooms of the Hotel Ghis Place, for a well deserved rest.